Development of DKG and resharing for SSV network

The highly anticipated Eth2 transforms Ethereum’s current Proof of Work consensus protocol into a Proof of Stake consensus protocol, in order to achieve higher energy efficiency, higher level of decentralization and hence higher network security. Eth2 requires a validator to be online 24/7 to perform its network duties, otherwise the validator faces risks of seeing part of their staked tokens (32 ETH each) being slashed. SSV.network endeavours to help validators achieve robustness and fault tolerance in their operations.

SSV’s solution includes a secure multip-party computation (MPC) layer to handle the distribution of validator keys and the signing of blocks. In this proposal, we aim to develop a complete MPC solution which extends the basic signing functionality in SSV’s current implementation and it achieves the following objectives:

All the operators in the network collaborate with each other to custody the keys (in the form of KeyShares) and produce the threshold signatures for the validators. The MPC layer sits on top of the SSV network, leveraging SSV’s existing P2P network for operators to transmit the messages involved in the MPC processes and exposing APIs for the SSV main protocol to access the MPC functionalities. At a high level, the MPC layer consists of mainly three protocols, namely the Distributed Key Generation (DKG) protocol, the Resharing protocol (i.e. redistribution of the KeyShares to a new group) and the Signing protocol. Each of these modules may have variations to support various use cases.

In SSV’s current design, operator and validator information is registered in a registry smart contract. The KeyShares for the selected operators are generated from the signing key supplied by the validator during onboarding. And the KeyShares are encrypted for the respective operators and are stored in the registry smart contract. This may be sufficient when the Merge hasn’t happened and the validator cannot change their signing keys.

Going forward, to support more flexible use cases (especially after the Merge), we propose an SSV-DKG protocol, which handles the key generation by the SSV network. In SSV-DKG protocol, the validator will select its set of operators and the selected operators come together to generate their KeyShares.

The DKG is built on top of verifiable secret sharing (VSS) but eliminates the need for a trusted party. Its correctness and privacy are guaranteed by homomorphic encryption. In this way, a signing key is generated for a validator jointly by the operators. But the signing keys are not known to anyone including all the operators even though they can make use of their respective KeyShares to participate in producing the signature for the validator. Besides being used for Signing, KeyShares are also used for Resharing.

The core process is based on [GG20] and described below:

In SSV’s current design, the redistribution of KeyShares is initiated by validators from the smart contract. What happens is essentially the validator (who knows its own signing key) creates a new set of KeyShares and encrypts them for the respective members of the new operator set.

However, this requires a validator to closely monitor the performance of the operators. A possible improvement is to leverage the secure Resharing protocol whereby the redistribution of KeyShares can be handled by the existing operators without the involvement of the validator. Together with the DKG protocol where the signing key is not known to anyone (not even the validator), the Resharing protocol can help in the event where there’s addition or removal of operators, or if some component of the underlying infrastructure is corrupted. As the protocol only involves the operators, the process can be automated and is transparent to the validator.

The Resharing process is described below:

The signing protocol is based on BLS threshold digital signature. It requires the participation of any m or more of the total n operators of a validator. Each operator generates a signature using their respective KeyShares and any of the m+ operators can choose m valid signature shares and aggregate them to construct the final signature corresponding to the validator’s signing key.

As the current SSV codebase already contains the implementation of the Signing protocol, our core development work will be around the DKG and Resharing protocols. We will create a separate open-source repository to host the code for the core logics which will be developed as a library in Rust along with a Golang wrapper using CGO. The integration and relevant changes required in the SSV protocol will be done in a fork of the existing SSV repository.

We chose to implement the first version in Rust as the development team has existing MPC libraries in Rust which can be used to this project. To implement it in Rust will give us shorter time to market as well as better code quality and security. Subsequent to the first implementation in Rust, the code can be ported to Golang by the team or by the community.

We aim to deliver the first beta version in 4 months after inception.

We are thrilled about the potential of SSV as an infrastructure to ETH staking and dedicated to develop and improve a secure MPC solution into SSV protocol. We propose a compensation plan with two components to align the long term interest of SSV and x-matrix labs:

Development fee to deliver first beta version of MPC and integrate it with the existing SSV testnet/ mainnet: 200,000 USD (in stablecoins or Ethereum)

The project will be carried out by x-matrix labs - a team jointly formed by RockX (a professional staking provider and participant in SSV testnet, www.rockx.com) and a group of developers specializing in protocol development since 2016. The team is experienced in building mining pools, MPC wallets and zkp solutions (particularly in Filecoin network). We would like to leverage our expertise and experience in MPC to contribute to the SSV network.

I think people don’t fully appreciate the importance of a DKG implementation for SSV, this is an enabler to many projects to use decentralized key generation to create decentralized staking services on top of SSV.
This is as important as arithmetic operations in solidity…

Just watched you guys’ talk on ssv youtube channel and I fully agree that dkg could bring benefits to ssv network. As Alon said, both teams should talk more to reach a consensus on the workflow and its deliveries. I look forward to seeing the proposal snapshot soon.

Not quite understand why DKG is needed. The validator knows the signing key anyway, and it maybe more “safer” for him to know the entire signing key?

I do think refreshing key shares is important.

DKG enables a distributed generation of validator keys between independent operators. It’s a must for use cases like decentralized staking pools

That only makes sense that the validators do not want to manage the entire signing key, right?
The current method by splitting the signing key via Shamir Secret Sharing would be sufficient to prevent the operators from knowing information of the keys.

Btw, DKG and refreshing shares may do not need to use homomorphic encryptions (say Paillier), which could avoid expensive range proofs.

Yes, you are right. DKG/resharing doesn’t provide much value for current way of splitting the signing keys which are generated by validators. It’s more to provide the ability to support cases where validator doesn’t want to manage the signing key (especially after the Merge). It’s an enabler to the SSV ecosystem so that we can fully decouple the validators and operators but are still able to ensure the security of the keys. With this decoupling, new possibilities will be opened. For example, it allows SSV to more easily interoperate with other DeFi protocols as the validator doesn’t need to manage the keys and it gives us more flexibility in the governance and management of the operators to achieve better robustness and resilience in the operations.

About your second remark, Paillier encryption is not necessary for DKG and resharing.

That makes sense, thanks!

Hi all, we have been studying the SSV Network and conducting research at the background for the past weeks. We would like to provide an update from the initial proposal with more details on the implementation and timeline. Looking for comments from the community: 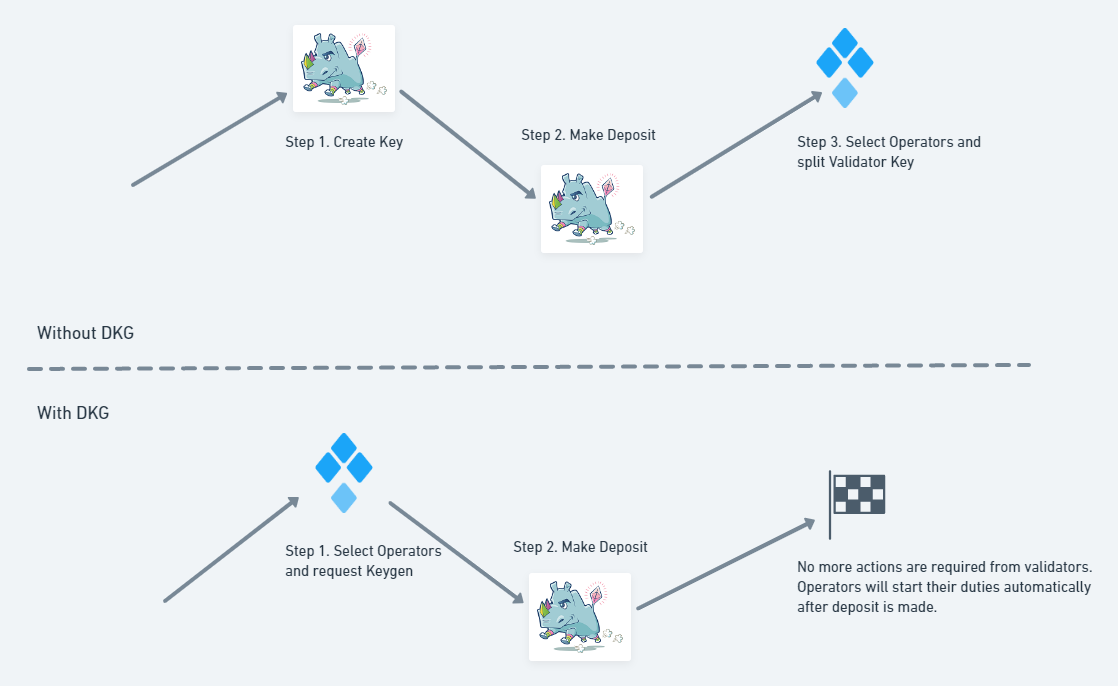 The diagram depicts the pre-merge validator onboarding flow without DKG and with DKG.

Currently a validator needs to create a signing key and withdrawal key following the instructions on Ethereum Launchpad. By default, both keys are derived from the single set of mnemonics, users will receive a keystore containing the signing key as well as a signed deposit data. After that they need to make a deposit of 32 ETH along with the deposit data via the Launchpad. Finally, they need to go to the SSV app to select operators and split their signing keys for the selected operators. The selected operators will listen to the events resulting from validators actions and start to perform their duties for the new validators.

With DKG, the required keys and deposit data will be generated in different ways. Users don’t need to manually generate the signing key. Instead they will send a Keygen request via the SSV app. This request can be bundled together with the operator set selection so that no separate steps are required. Once the request has been successfully submitted, the operators will automatically detect the request and perform the DKG protocol to generate the keys and create deposit data. The operators will register the encrypted shares in this case so that the shares could be recovered the same way as without DKG. One thing to note is that the withdrawal credential (i.e. hash of withdrawal key) has to be supplied by the user. Once the DKG is done, users can retrieve the deposit data from the SSV app and use it in Launchpad to deposit the staked Ethers. The pre-selected operators can start to perform their duties once the deposit has been made and no additional actions are required from the validator.

Although the flows are different for the two modes, they are compatible with each other. With the introduction of DKG, users have another option to generate the keys and in future some use cases will require users to opt for DKG. However, the existing flow and keys will continue to work without any actions required from the users.

The project is planned to be completed in 20 weeks (roughly 4 months). We’ll run 10 two-week sprints. There are roughly 4 chunks of work and we set the following milestones:

I appreciate the transparency

We have completed the first phase of development to adapt BLS DKG for eth2 use cases. The demo code can be found here. The functionalities include:

If you are interested, feel free to try out our demo scripts and here is a video recording of the demo.